In-between the park Madunici and the Canyon of Cetina River raises our newest pearl – Villa Grace. With a private terrace, heated pool and view of the surrounding mountains, this villa is the perfect getaway for the traveller who likes space and privacy.

Remove from favorites
Why us?

Villa Grace lies in the charming village of Kostanje, in between park Madunici and the wonderful canyon of Cetina river. It is an area rich in cultural and natural beauty.

Along its more than a 100 kilometres long course, the Cetina River has something to offer to all. If you are a real sports enthusiast than you won’t skip zip-line riding, canyoning, kayaking or rafting (starting point for rafting is only 4 km from the villa). For those more down to earth, long walks alongside the river, sightseeing river boat tours or a spontaneous enjoyment of the scenery will also be a reward to themselves.

The entire course of Cetina River is full of numerous medieval fortresses, which remind one of the turbulent history of this region. Some of them are well hidden and partly destroyed, while others still stand above the river, offering fantastic views of the canyon.

The Red lake has the most admirable karst effect, as it lies in a big sinkhole, with wall about 200 m around the surface. It is especially known for its numerous caves and remarkably high cliffs. The waters drain out of a basin through underground waterways. The lakes name comes from the reddish-brown colour of its surrounding cliffs, coloured by iron and oxides.

The Blue lake lies also in a sinkhole and has an oval shape with max dimensions around 800 m x 500 m. The waters' depth varies with the season. In spring for example, when the snow from the surrounding mountains melts, it can reach up to 90 m.

The first beach lies in Pisak, which is the farthest point of the Riviera of Omis, and can be reached in 25 min from the villa. Pisak is a true oasis of peace and tranquillity, and as some people say it is one of the most beautiful places on the Riviera. The small village offers pebble as well as sandy beaches. The nearby famous cove of Vruja is known for being one of the best locations diving and spearfishing on the Adriatic Sea.

Further, to the north you may find the villages Medici and Mimice – two typical Mediterranean places, which complement one another perfectly.  Alongside the coast of Medici village, there are numerous pebble beaches and the sea is crystal clear. The experience of this village is somewhat Robinson Crusoe-style, and once you have had enough of peace and tranquillity, you can easily go over to Mimice – a perfect holiday getaway with several restaurants, taverns and grocery stores reachable in only 10walking minutes from Medici village.

Another small village on the Riviera is Marusici village full of numerous pebble beaches and hidden coves. These beaches are particularly interesting for families with smaller children, as well as couples seeking to enjoy the intimacy of the lush Mediterranean vegetation.

Driving further towards Omis town, you will come by Lokva Rogoznica village with its several beaches and pristine nature ideal for relaxation. Beaches in the village and its surroundings are mostly pebble beaches, but you will also find several sandy beaches suitable for families with small children. Beside the perfectly crystal clear waters, Lokva Rogoznica is covered with pine trees, stretching all the way to the sea.

If you are into discovering even more beautiful beaches, then we recommend you visit Brela town, which is a part of Makarska Riviera. Here you will find an amazing combination of mountains and sea, and the longest and whitest pebble beaches on the Adriatic Sea. Punta Rata, Soline and Stomarice beaches with thick pine forests will leave you breathless and make you definitely fall in love :)

Who are these fairy-tale locations intended for?

Luxury villas, apartments and boutique hotels in Croatia on this web page are selected for exceptional people, those who seek the finer things in life, delight in a breathtaking ambiance and appreciate the hosts' genuine care and thoughtfulness.

If you are tired of mass tourism and are looking for something inspiring and authentic, then you have come to the right place. We take care of your needs as if they were our own. Because here details do matter.

The luxurious villa Grace features 4 separated double bedrooms and 4 bathrooms, equipped with a bath or a shower.

The ground floor has one bedroom, a hall with sofa bed and a large SPA area with Jacuzzi and sauna.

The second bedroom with a living room and sofa bed lies on the 1st floor, while the 2nd floor features two large bedrooms. These three bedrooms have terraces facing the south side of the house.

Beside every bedroom there is also an en-suite bathroom.

Villa Grace offers a large back garden with a wonderful heated swimming pool, a gazebo with table, comfortable chairs and there is also an outdoor shower. From the pool area there is a magnificent view of green slopes and Mount Rogoznice.

There is a large summer kitchen with a fire place, which continues into a spacious living room with fully equipped kitchen with a dishwasher, an oven and a microwave. Next to the kitchen you may find the dining area and living room.

The living room features a comfortable angle sofa, a big Flat-screen SAT-TV with media centre and a fire place. 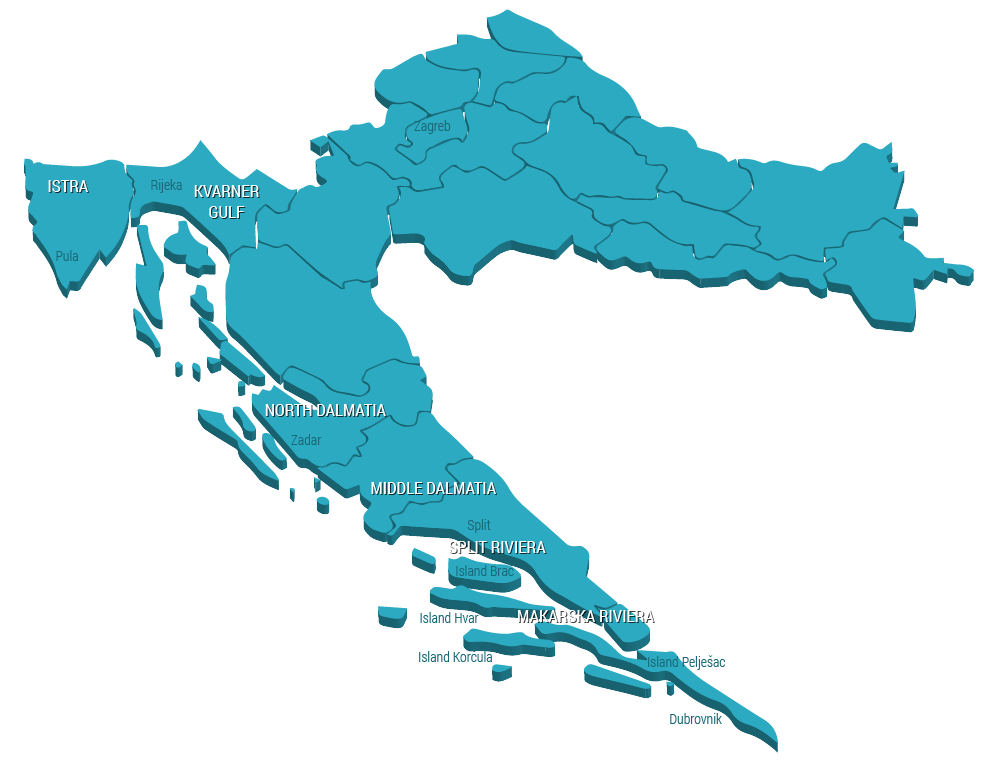