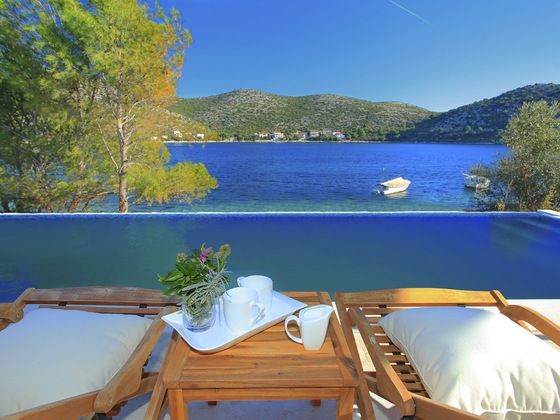 Beachfront, with endless pool in a quiet bay of Lastovo Island

Completed in 2014, this 4 bedroom villa Luxury Lastovo Petit holds private access to the beach and a mooring on the warm Mediterranean waters, making it the perfect base from which to explore the 45 surrounding islands and the Croatian coastline.

Remove from favorites
Why us?

Villa Luxury Lastovo Petit is a sleek modern villa that accommodates up to 8 guests in the heavenly seclusion of Porto Rosso, on Lastovo, the sunniest of all the Croatian islands. It offers a modern open plan living that flows right out through the terrace and into a natural bay that is sheltered from the air currents of the open sea, maintaining a tranquil stillness. You can stay on the property and appreciate the focus on outdoor living, with huge slide-away doors that open onto a private hydro-massage swimming pool, and a terrace with deck chairs and dining table. All of these spaces are pleasantly afforded ample shade thanks to the carefully considered architecture of the house.

7 km from the villa you will find a bakery, grocery store, a bank and a post office. The bay features also some restaurants and only 200 m from the villa a local is making home baked bread, and offers home grown vegetables and fruit. The owners likewise, have a family farm, from which they can supply you with fruits, vegetables, olive oil, wine, chicken eggs and quail eggs… They also run two restaurants on the island, from where you can order fresh wild fish and meat. Everything you order can be brought to the villa.

Thanks to it geographical position, dynamic landscape and diverse coastline, preservation of nature and diversity of flora and fauna of the Lastovo underwater area, this island is extremely appealing to divers of all categories.

With its 46 small islands, 46 churches and chappels, 46 wineyards and surrounding sandbanks, is a genuine heaven for lovers of nature, sailing, good food and wine, fishers who angle for tuna and other trophy fish. After fifty years, Lastovo is open to tourists again. In addition to the beauty of its unspoiled nature, the island is famous for its carnival in which all the island residents participate by wearing beautiful folk costumes. Special tourist attractions of the island are the famous Lastovo chimneys that were once status symbols of old Lastovo families.

Located in the small bay on island Lastovo

It is a village and small bay on the southern coast of the island of Lastovo. The bay is also known as “Portorus” . This bay is so secluded that it is not possible to see it from the open seas. It also provides a good place to anchor, as it is sheltered from open sea and strong winds. Our villa is based here,  only a stones throw from the sea! This is one of the largest and one of the most beautiful bays on the island of Lastovo. Because of its shape it is protected from the wind and the waves which makes it an ideal place for yachstman. Here,  there is a pontoon mooring harbour with about 18 mooring places. It is an ideal place for having a nice, peaceful vacation full of sunshine and tranquillity.

In the vicinity of the bay, stands the oldest austo-hungarian lighthouse on Adriatic which is located on the high steep cliff, about 90 meters above sea level.  It was built in 1839. on cape called Struge. This place offers a splendid view towards open sea.

Beautiful views and easy access to the sea through the pine woods on the northern side of the lighthouse makes this tourist destination very attractive.

Lastovo is ideal for both lovers of active or passive holidays. Since the island is mountainous and mainly covered in forest there is a possibility to go hiking, walking or cycling; the island has marked hiking and cycling trails. Bike rental is possible only in Pasadur. The island has no poisonous species (snakes or spiders) so you can safely go hiking. For those who like submarine world, there are two diving centres, in Pasadur and Zaklopatica.

Hum is the highest point of the island from where you can see the island of Palagruza, Mljet and even Monte Gargano in Italy when the weather is bright. From here you can watch the sky in the night; it is claimed that Lastovo is the place with the starriest sky in Europe.

Boat excursions are also provided to the island of Mljet or Palagruza or fish picnic on the Saplun Beach. It is also possible to see the whole island from the sea.

In the 17th and 18th century, people from Lastovo used to compete with each other making chimneys each more beautiful and original than the other. Thus the island of Lastovo has become famous for its chimneys (called fumari) and high broad terraces (sulari).

Above the town of Lastovo there is a meteorological station which was once a forecastle (Kastel) built by the Government of Dubrovnik. In Skrivena Luka you will find one of the oldest lighthouses on the Adriatic, the Struga Lighthouse.

Loud and fun, with strong family bonds, the hospitable inhabitants of Lastovo are ready to accept strangers – you will never be hungry or thirsty on this island!

In addition to the beauty of its unspoiled nature, the island is famous for its Lastovo Carnival Poklad, in which all the island residents participate by wearing beautiful folk costumes.

This carnival event takes stage in Lastovo every winter on the Tuesday before Ash Wednesday and is very popular event among locals as well as their visitors.

Directly at the beach

The villa houses a fully equipped kitchen and has the benefit of secure and off-road parking. This mountainous island is well worth exploring, steeped in history dating back to medieval times and boasting a rare selection wildlife and natural beauty that forms part of a protected nature park. Lastovo is also revered for the richest fishing waters in the Adriatic Sea and combined with a great local wine industry you can be sure there are some special gastronomic experiences to be discovered!

- Large sliding glass walls open to a light and airy living room space that creates a transparency between inside and out.
- Fully equipped kitchen with pantry and dining room for 8.
-  Double bedroom with en-suit bathroom

First Floor
- An elegant staircase leads to a communal hall area with TV and sofa.
-  2 double bedrooms with en-suit bathroom and terrace area from which to enjoy the views of the turquoise sea and the island greenery.

If there is anything you would like to arrange for your stay, please contact us, we will be happy to help.

This is by no means an exhaustive list, so please just contact us to help you arrange any of those little extras that can really make the difference.

For our guests we can organize upon request: